A family that plays together stays together.  Weekends and evenings are times to gather with family members.  However, a family outing can quickly get expensive if you’re going to a concert, the movies, or a sporting event.  Staying inside may result in members doing their own thing, which defeats the intent of doing something together.  Enjoy activities that won’t break the bank or a sweat. 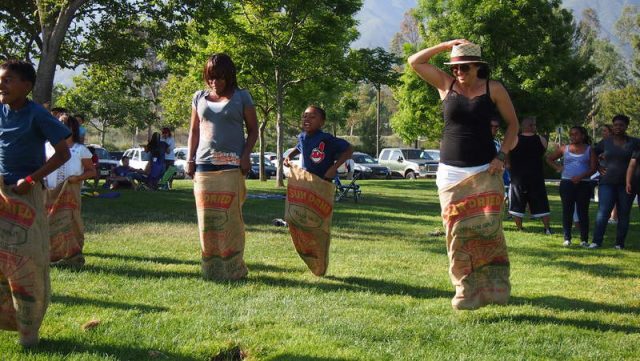 Get a giant marker whiteboard from a home goods, office, or teacher’s supply store.  Alternatively, you can get a huge notepad from an arts and crafts store.  Have family members write phrases and titles on note cards.  However, be sure that each team picks from a pile created by members of the opposing team.  See if family members can draw enough to clues to elicit a correct response from their team.  If family members get tired of drawing, you can always alter the game by playing charades

Purchase a soccer or similar sized ball from a sporting goods store and head to the backyard or park with an open field.  You can play kickball in a variety of ways depending on where you’re playing and how many players are on a team.  For example, if you have a large crowd, you can play with bases, similar to baseball.  If there is a limited number of players, play with a point system depending on how far the ball is kicked in the air without being caught by the opposing team.

Purchase several (four or five) balls from a sporting goods store, making sure they are soft enough so they won’t hurt.  Each team requires the same number of players and separated by half court.  Start with the balls lined up on the center line.  Team members need to try and hit those on the opposing team to get them out.  If a ball is thrown and caught by an opposing player, the thrower is out.  Play until there is only one player left.

Team members get in a line with each person placing their hands on the person’s shoulder who is in front of them.  The head of the dragon attempts to catch the tail.  Team members must continue to hold onto shoulders yet do everything they can to keep the head from catching the tail.  Once the head catches the tail, all players move ahead in the line with the head person now becoming the tail.

Like tennis, pickleball can consist of singles or doubles matches.  The ball is served with an underhand stroke so contact is made below the waist.  Points are scored by the serving side only and tallied when the opposing team fails to return the ball, hits a ball out of bounds, or steps into a non-volley zone.  The game is played up to 11 with the winner beating the loser by at least two points.  Due to the low-impact and mild speed of the sport, it’s a great game to play with small children and seniors.  Get supplies from Wolfe Sports.

The game consists of two sets of bean bags and two game boards.  The boards are made of a hard plastic or wood with legs that make it sloped downward.  You can play singles or doubles.  Each team member attempts to get as many bags in the hole in the board as possible.  There are varied ways to score points.  One way is to award three points for throwing a bag in the hole, two points for a bag touching the hole, and one point for getting the bean bag on the playing board.

Team members are joined at the ankles with a bandana as they attempt to cross the finish line before all other teams.  You can vary the game by having two teams with each side racing around a cone and then unwrapping their ankles before passing off the bandana to new team members who go on to complete a cycle.

Harley Scott has a large extended family with multiple nieces and nephews he enjoys spending time with. As a fitness instructor it’s usually Harley that gets the family involved in outdoor activities for some family bonding time.