One Smart Way To Keep Your Kids Safe While They Play

Let’s be honest, we love our little cherubs so much that there are moments when it can hurt. And there are times when the urge to throttle them is strong! That’s when timeout is really important, for you as much as for them.

If you’re anything like me, you’re probably grateful for the alone time when you can get it, but that doesn’t stop you from worrying if there are any accidents waiting to happen as they play.

Falls from climbing frames, swings and other play equipment aren’t that common, thankfully, but they do happen. There are several solutions for creating soft surfaces that break falls when they happen, one of which is rubber chippings. 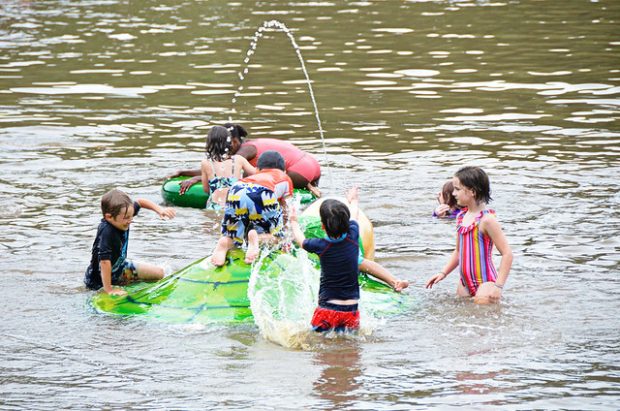 What Are Rubber Chippings?

Rubber chippings are pieces of rubber that are made from recycled tires. The tires used for the process are from  cars, trucks and airplanes mainly. The tires go through a process that converts them from the round shape we’re all familiar with into tiny chippings that are rendered safe and the colored.

The size of the final pieces varies depending on what it will be used for, but that largest size is usually no more than about two inches.

How Is It Used?

There are essentially two ways that recycled rubber can be used in play areas and other environments. One is to use it as a ‘loose fill’ and the other is mix the product with a resin. The resin bonds the rubber chippings together, which creates a smooth, cushioned surface surface.

You’ve probably seen these surfaces before, although you may not have realized it. Athletic running tracks often use this form of rubber for their surfacing, as do tennis courts and many other sporting arenas, including soccer and basketball.

The loose fill rubber is usually used in larger chunks, around two inches in size, and is spread within a contained area. This provides a highly cushioned surface and is much like wood chip that has traditionally been used for the same job.

The loose fill chippings are usually laid to a depth of 4 inches, which has been tested to a fall height of 2 metres / 6ft. 6 inches.

Instead of the nasty falls that often end with a thud that you and I were accustomed to as kids, rubber flooring breaks the fall instead of kids breaking their limbs.

Yes it is. Recycled tires have been tested for their safety and there have been no reports of any toxic residue, which is probably the main concern of parents.

Wood chip has been used for many years in playgrounds and home play areas, but has some drawbacks that rubber chippings don’t have.

Wood chips are attractive to termites, mold and fungus, which are all things we’d rather keep our kids away from. Termites aren’t such a big issue, but mold and fungus can really play havoc with the human immune system, especially for young children, whose immune systems are still developing.

One of the great things about rubber in playgrounds is that mold, fungus and termites aren’t attracted to it at all. Rainwater runs off it much like it does a waterproof jacket, which means the mold and fungus don’t have anything to ‘hang on to’.

Is It Cost Effective?

That’s the other great benefit compared to wood chip and other similar playground flooring solutions — over the long run it works out quite a bit cheaper.

Whereas wood chip soaks up water and is prone to breakdown and deterioration, rubber flooring chippings and other rubber flooring aren’t. That means once it’s laid in place, it requires very little maintenance and is far less likely to need to be replaced anytime soon.

So if you’ve been thinking about creating a play space outside for your kids and you’ve been wondering what surface to use, rubber chippings or one of the other rubber flooring solutions should certainly be up there for your consideration.