Nutrition starts at home. If you’re ready to throw out the butter and start eating better, here are just 14 healthy cooking tips that come from the experts themselves. 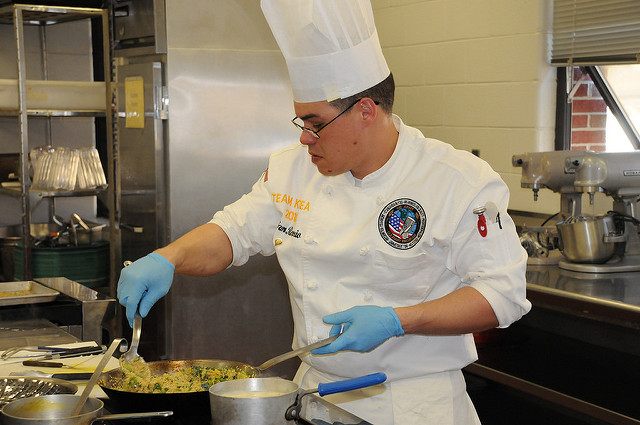 1.  Go Extra Sharp With Your Cheddar

Cheesy dishes are everyone’s favorite comfort food, but they can really pack on the pounds. Try to use less cheese in your cooking by increasing the flavor of a smaller amount. Extra sharp cheddar is good for this, and so are most goat cheeses.

Did you know that non-fat yogurt can be strained on a paper towel to give it the same texture and cooking properties as sour cream? According to <i>Healthy Appetite</i> host Ellie Krieger, this is one of her go-to tricks for leaner cooking. You won’t even notice it in your final dish.

3.  Add Rice to Your Hamburger Patties

Brown rice mixed with your hamburger meat will give you a bigger portion size without the added calories. It will also tick off more than one box on the nutritional pyramid, so you’ll be that much closer to getting your daily recommended amounts of everything.

There’s a trick to pickling your vegetables at home, but if you can master it, it’s one of those cooking techniques that you’ll come back to again and again. Harold Dieterl swears by it, and he won the first season of <i>Top Chef</i>, so his knowledge is clearly worth something.

Look for lean cuts of beef and pork products. They might not sizzle in the pan like the others do, but they won’t sizzle your heart either. Good cardiovascular health starts in the kitchen.

It may be delicious, but it just isn’t good for your health, at least not in the serving sizes that most recipes demand. Use a butter-flavored spray to get the same flavors without all of the fat. If you just need moisture for a dessert or stir fry, canola oil works too.

The yolk of the egg has all of the protein and flavor, but it’s also triple the amount of calories of the egg white itself. If you’re baking, you can save yourself this unnecessary extra by using two egg whites for every whole egg.

8.  Create Your Own Deep-Frying Technique

If you love the taste of fried chicken but hate the way it clogs your arteries with every bite, this is the cooking tip for you. Brush your chicken with milk or egg whites and dip them into seasoned breadcrumbs. Then bake for the usual amount of time. You’ll have something that’s roughly the taste and texture of fried chicken, but it will contain less than half of the calories. Alternatively check Cozy meal’s cooking techniques classes. Depending on where you live they may have some classes for you.

Lemon juice can give your dishes a “wow” factor without adding a significant amount of calories. It’s one of Giada De Laurentiis’s favorite tricks, and since she’s done so much for the food industry that she’s been put in the Culinary Hall of Fame, she knows what she’s talking about.

Sodium is the evil lurking in all of your canned and packaged products. Avoid it if possible by cooking your own meals and using herbs and spices in place of salt. You’ll know that you have a winning combination when you don’t notice the missing tang.

Skim milk doesn’t have the same nutritional properties as whole milk, so if you’re trying to get your daily amount of calcium, it probably won’t help. That said, skim milk is perfect for recipes where you only need dairy to give something consistency or hold it together. Go ahead and stock up.

Lee Anne Wong lost 50 pounds after leaving <i>Top Chef</i>, and she credits the success of her diet to soy. By dicing, slicing, mixing and blending it into your existing dinners, you can acclimate yourself to the taste before eating it solo.

Beans are natural sources of fiber, so they’ll make you feel fuller with less amounts of food. They can also be used in a variety of dishes, including black bean brownies, so they’re good ingredients to have even for dessert lovers.

They aren’t the most calorie-friendly, but they’re packed with so many “good” fats and fibers that they’re an essential ingredient for a healthy heart. Go ahead and sprinkle some nuts over your sundae. You’ve earned it with all of this healthy cooking.

These are just a few tips for more nutritious plates. Whether you’re looking to make drastic changes or simple improvements, use these guidelines for healthier meals and a healthier you.