“I found myself pulling more and more tuft out of my brush and a bunch of hair from the shower drain. That’s when the compliments of having healthy and shiny hair stopped and the worry began.” 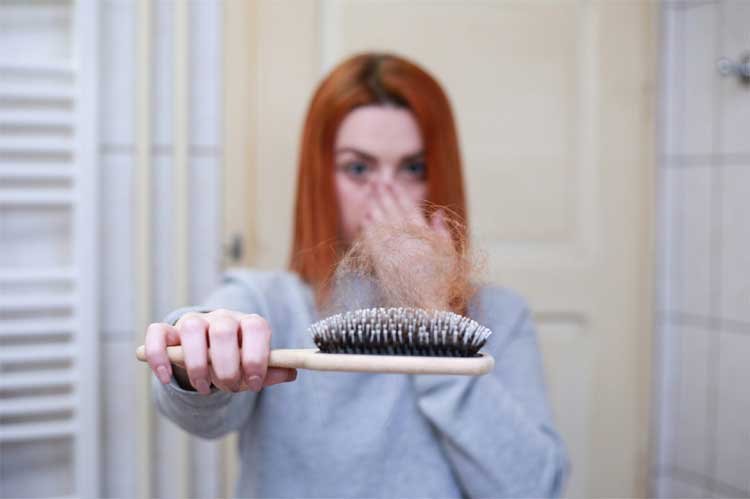 Don’t panic. That’s not likely to be hair loss. It’s completely normal to lose up to 100 hairs a day according to American Academy of Dermatology (AAD). On the other hand, nearly everyone experiences some hair loss over time. And some start feeling more depressed as their hair starts falling out.

So, what is hair loss? Hair loss is defined as the gradual or sudden loss of actively growing hair follicles on the scalp, usually following a change in the hair growth cycle.

Most forms of hair loss are caused by shortened growth phases of the hair cycle. When the growth period becomes too short, hair falls out quickly, excess shedding occurs and the growing hair comes in thinner and is less significant.

A shortened growth cycle might be the root cause of hair loss, but what prevents the beginning of the hair cycle are hormones, diet, stress, genetics, aging and damaging hairstyles.

Androgenetic alopecia is often attributed to genetic predisposition and family history. It indicates that a combination of hormones and heredity (genetics) is necessary to develop the condition. The exact cause of this pattern is unknown. Although it appears both in men and women, hair loss in men is often faster, has an earlier onset, and more extensive.

In men with androgenetic alopecia, hormones related to testosterone (also called androgens) cause hair follicles to have a shorter-than-normal growth phase, resulting in hair shafts that are abnormally short and thin. In general, genetic background plays a significant role in the development of androgenetic alopecia in men, but not the exact way that family history does.

For many people, losing their hair is a frustrating experience. Fortunately, treatments are available that can help to regrow hair or prevent further hair loss.

There are two medications available to slow male pattern hair loss, minoxidil and finasteride. Women can also be treated with minoxidil or a medication called spironolactone. Sometimes, finasteride is used in women who do not respond to other therapies, but it is not clear whether it is effective. In some cases, surgical options may also be considered.

Surgical hair restoration procedures include various versions of hair transplantation (taking hair from the back and putting it near the front). Transplant procedures have improved greatly in recent years that they can produce much more attractive and natural-looking results than older methods that sometimes leave a “checkerboard” or hair plug look. Micrografting is a type of hair transplant surgery in which a small drill is used to remove hair grafts from the donor hair which are then inserted into the recipient area (bald area of the scalp).

The two most common hair transplant procedures are called Follicular Unit Transplantation (FUT) or the Strip method since it involves taking a strip of tissue from the back of the head and transplanting individual hair follicles to the thinning and balding areas. The other is Follicular Unit Extraction (FUE) which is a no stitch, no linear scar technique that involves taking individual grafts from the donor area and transplanting them to the thinning and balding areas.
Get Free Netflix Now

While genetics may play a key role in hair loss among African American women, heat, chemicals and tight hairstyles such as braids, dreadlocks, extensions and weaves that pull at the hair root may also increase the risk of losing their hair.

The Black Women’s Health Study at Boston University’s Slone Epidemiology Center surveyed nearly 5,600 black women about their experiences with hair loss. Almost 48 percent said they had suffered hair loss on the crown or top of the scalp.

Another cause of hair loss in African American women is traction alopecia. It refers to the loss of density and coverage at the frontal half of the scalp, starting just behind the hairline and extending toward the crown. It is characterized as a small or localized hair loss caused by repeated and constant pulling or traction on hair roots. Tight braids and ponytails can pull hard enough on hair and can produce a localized hair loss at the front of the scalp.

There are several treatment options for hair loss in African American women, including avoiding tight hairstyles that pull at the hair follicle, as well as limiting the use of chemical relaxers. Medications, lasers and PRP can also protect hair follicle function. Furthermore, hair transplants can restore density where hair follicles are dead due to lack of blood circulation.

With the severe balding at the top of the head of African-American women, having a central location of the hair loss right on the top of the head, another treatment option is scalp reduction although this is not commonly performed and can cause issues down the road with the aging process. Here, the hair in the grafts fall out after a few weeks and then start growing at about three months for a full head of hair in one year or less.

In addition to that, FUT is an optimal African-American hair restoration procedure for women who are having traction alopecia, where grafts are placed along the hairline and temples to restore density.

Androgenetic alopecia is also a common disorder in Asian women.

Most Asians have straight, black hair that is typically larger in diameter compared with other ethnicities. They are considered more likely to suffer overall hair thinning than that of other hair types.

Hair loss in Asian women caused by hormonal changes like pregnancy, menopause, or stress may not require any treatment. Instead, the loss will likely stop on its own after the body adjusts.

However, Asian hair loss can also be caused by traction alopecia because of tight hair styling and the use of religious covering. Alopecia Areata, Telogen Effluvium, Scarring Alopecias goes along with many other Asian hair loss conditions.

Androgenetic alopecia in Asian women is often related to a number of physiological and psychological issues. The problem must be viewed in perspective, wherein a distinct approach is important because different people are affected in various ways when they lose their hair.

Some of the hair loss treatments for Asian women include: topical minoxidil solution and oral antiandrogens (cyproterone acetate, spironolactone and flutamide can be used as alternatives to minoxidil).

Despite the advances in medical therapy, hair transplantation remains the only means of hair restoration in cases of severe androgenetic alopecia in Asian women.

The demand for Asian women hair restoration has increased globally in recent years and Follicular Unit Extraction (FUE) is gaining popularity. There are techniques used by different ethnic groups in Asia, including shaving, non-shaving FUE and robotic hair restoration surgery.

There are emerging solutions in the market including exosomes, micro needling and a series of platelet rich plasma (PRP) treatments. However, these are still in the experimental stages.

Evaluation of a woman with hair loss requires a more detailed history and examination than evaluation of a man because of the more numerous medical and hormonal causes for alopecia in women. Evaluation by a hair loss surgeon can be helpful when a clear explanation for the hair loss is not readily available.